Twitter
What made you decide to create a game of your own?
It all started in 2016. I had just finished Undertale, and it had a deep impact on me. I had taken part in the development of an indie game before, so I wondered: Why can’t I create a weird story with simple game mechanics on my own? I had the tools and the time, so “LET’S DO IT!”
What games did you draw your inspiration from?
As said before, I was deeply influenced by games like Undertale as a whole, and also by the story of To the Moon. However, my references are not only from games: I’m a huge fan of Sergio Leone’s westerns (For a Few Dollars More, The Good, the Bad and the Ugly…), so that’s why one of the scenarios in NetherWorld is a desert inspired by them.
Here’s another example: the NetherWolian Church and some of its characters were created listening to Rammstein music.
Are you a solo operator or do you employ a team? If you are a team, how many people do you work with?
I started this project on my own on 2016, but the NetherWorld you know now is far better than I could ever imagine thanks to my team: Isabel Armentero (Erien) and Albert Serra.
Erien joined the project on 2017; she’s an amazing pixel-art artist, and took charge of the whole NetherWorld artistic area: Scenarios, characters, UI… In fact, it was while working together when Hungry Pixel was born. Months later, Albert joined the team to manage the upcoming Kickstarter campaign and all the communication stuff. Besides that, he’s writing the script of the game. He’s crazy, and I guess it’s the only way a person can write NetherWorld dialogues. 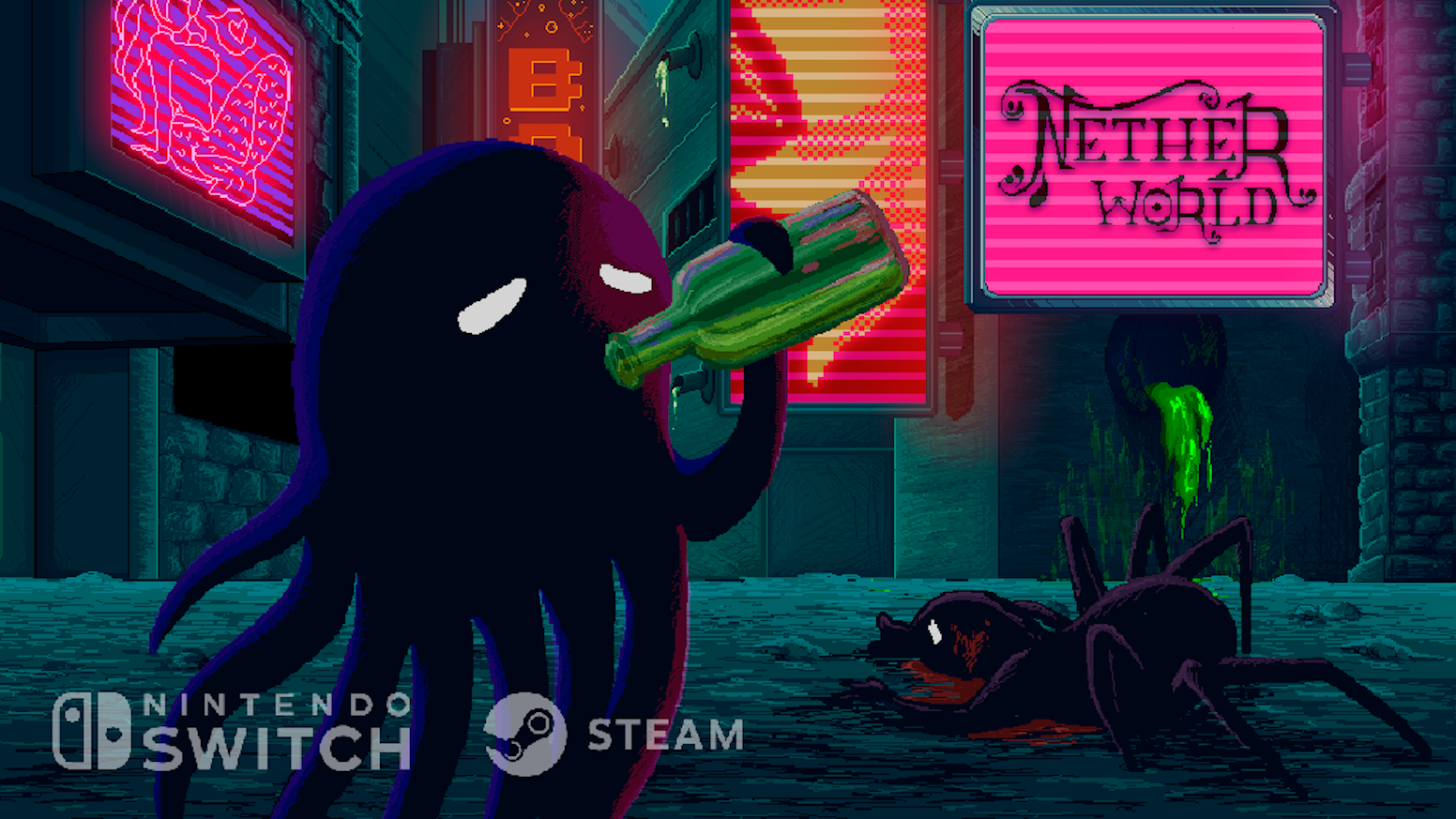 How far into the development process are you, when are you looking to release the finished product?
When we started the Kickstarter campaign (February 2018), we had scheduled we’d finish the game in one year (early 2019 aprox.). Unfortunately, this wasn’t possible due to several reasons: REAL LIFE, development improvements and changes, the time needed to create a demo that summed up most of the game mechanics, personal circumstances… That’s why we decided to delay the release date to 2020, 2021 at most.
This new date should give us enough time to develop the game we think our backers and all players deserve. We’re now reaching the 50% of the full game development.
Quoting Miyamoto: “A delayed game is eventually good, a bad game is bad forever”.
Which engine are you developing in and how are you finding working with it?
I’ve worked with both Unreal Engine and Unity3D. I programmed with Unreal Engine enough times to learn the basics. Now I’m using Unity3D, and I enjoy it a lot. I think it’s intuitive and easy to handle after some time playing with it. For NetherWorld I combine Unity3D with Visual Studio.
What tips would you give any indie developers just starting out?
Don’t do like us, and PLEASE start developing a small game! It’s always better to have a short-but-released game rather than a long-but-unfinished one which never will be released. People tend to link short games to simple or “too basic” development, and man, that’s not true. Even the simplest games entail more time and work than expected.
Oh, it’s also very important to build a community everywhere you can (Twitter, dev forums…), where people can find you and send their feedback. Sometimes we’re so focused in our beloved project that we miss important details… External people can help us detecting them**. Besides, they will spread the word about our game if they like it!
**Okay, paying attention to what people has to say about your game doesn’t mean you have to obey them. Social media are cool, but also full of haters writing crap, so first be sure about the game YOU want to develop, and then consider whether the constructive criticism helps you going forward or not.

When did you release the game and how did you find the development process?
I wish the 2021 Hungry Pixel team would be able to answer “Oh man we finally released the game several months ago, and the development process was incredibly easy, smooth and with no bugs to fix! 10/10 IGN!”
There’s irreverent stories and then there’s Netherworld! Where did the idea for this crazy story/setting come from?
Hahaha! Well, when I finished Undertale, I asked myself: How would the darkest and most decadent version of Undertale look like? With drugs, alcohol and realism, but also experienced in a surreal and odd way. Having that in mind, a wild jinxed-guy story appeared: What if a man is left by his wife, goes to a bar to drown his sorrows in alcohol, and gets involved in a crazy adventure?
…Aaand here we are!
You’d have to be born under a rock to not known a 16 bit inspired graphical style when you see one. What made you favour this classical style over the more modern look?
The main reason is because I’m totally in love with pixel art. Besides, when you see what artists like Erien can do with it… Check it out, it’s amazing!
We also want to vindicate pixel art not just as a “retro game style”, but as a timeless art style which has the same level as the rest. NetherWorld is a modern game made in pixel art style.
Is the game’s sense of humour as on point as its website? What kind of japery can we expect?
Absolutely. We like to think of NetherWorld as a satirical game, a caricature of the worst things of our society, as well as taboos related to sex, drugs, alcohol or religion. All in a whole new and dark world with tons of quirky characters. So expect black humor, rude vocabulary, drinking competitions, throwing babies to escape from monsters, partying with cokehead mages, drug dealing, having sex with a lovely grandma, burning people alive, bosses hitting you with a giant fetus… Yeah, expect that kind of crazy stuff. 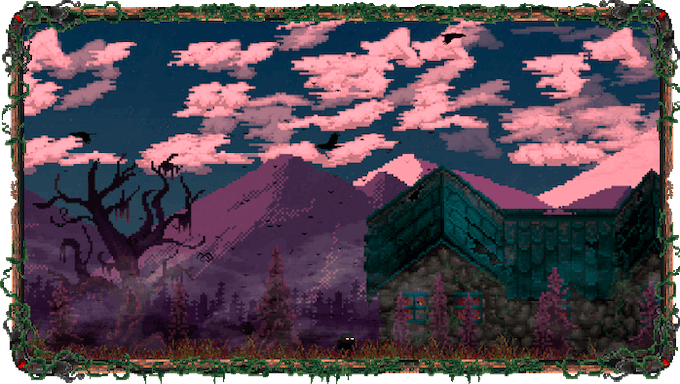 What platforms will the game be released on?
NetherWorld will be released on Steam and Nintendo Switch (eShop and physical).
What are your thoughts on the current situation with microtransactions and loot boxes in video games?
Ugh, we don’t like them at all. It’s a kind of perversion of what games are meant to be, don’t you think? There’s no challenge to improve through the in-game mechanics, your success seems to rely on your wallet now.
As a studio we’re developing our first “serious” game, and we don’t know where we’re gonna be in the future. However, as far as we (Hungry Pixel) are concerned, we’re not considering including microtransactions and loot boxes involving money.
Stay away from ludopathy, guys!
If you were stranded on a desert island that somehow had a decent electrical supply, which console and 3 games would you take with you, and why?
Cool, with that electrical supply I could get fish easily… Hahaha!
Hmmm, I wouldn’t like to underestimate any of the 3 consoles, I mean, each one could have a great role in my adventure: I’d use the PS4 as a grill, then the Xbox 360 red lights to stand out as an S.O.S. for planes, and the Switch to play NetherWorld in my free time.
Talking about games, assuming that NetherWorld would be included in the Switch (so now I have 3 more games to play MUAHAHA)… I’d choose Bayonetta 1 or 2 because they’re my favourite hack’n slash. I’d also take Red Dead Redemption 2 just to play as a badass man in a desert while being a not-badass man in a desert (I also love westerns). And lastly, Lost Odyssey! I haven’t played it yet, but I really want to since centuries. I guess in the island I’ll have more free time than now, so it’s perfect.

Which games studio, past or present, would you be most inspired to become one day?
I think Platinum Games is one of the best ones nowadays. Almost everything they touch turns into a great game. Bayonetta is (again) a great example of that.
What is your favourite gaming experience from your life?
Oh man… The most hardcore experience I remember was finishing Project Zero 1 on PS2 without a Memory Card! At that time, when you died you had to load the game to continue, so dying meant starting all over again. I was nearly killed several times… but finally I DID IT!
Thank you so much for your time and words!
Cool! Thanks so much for all the questions and your interest in NetherWorld. We hope you can enjoy it soon!