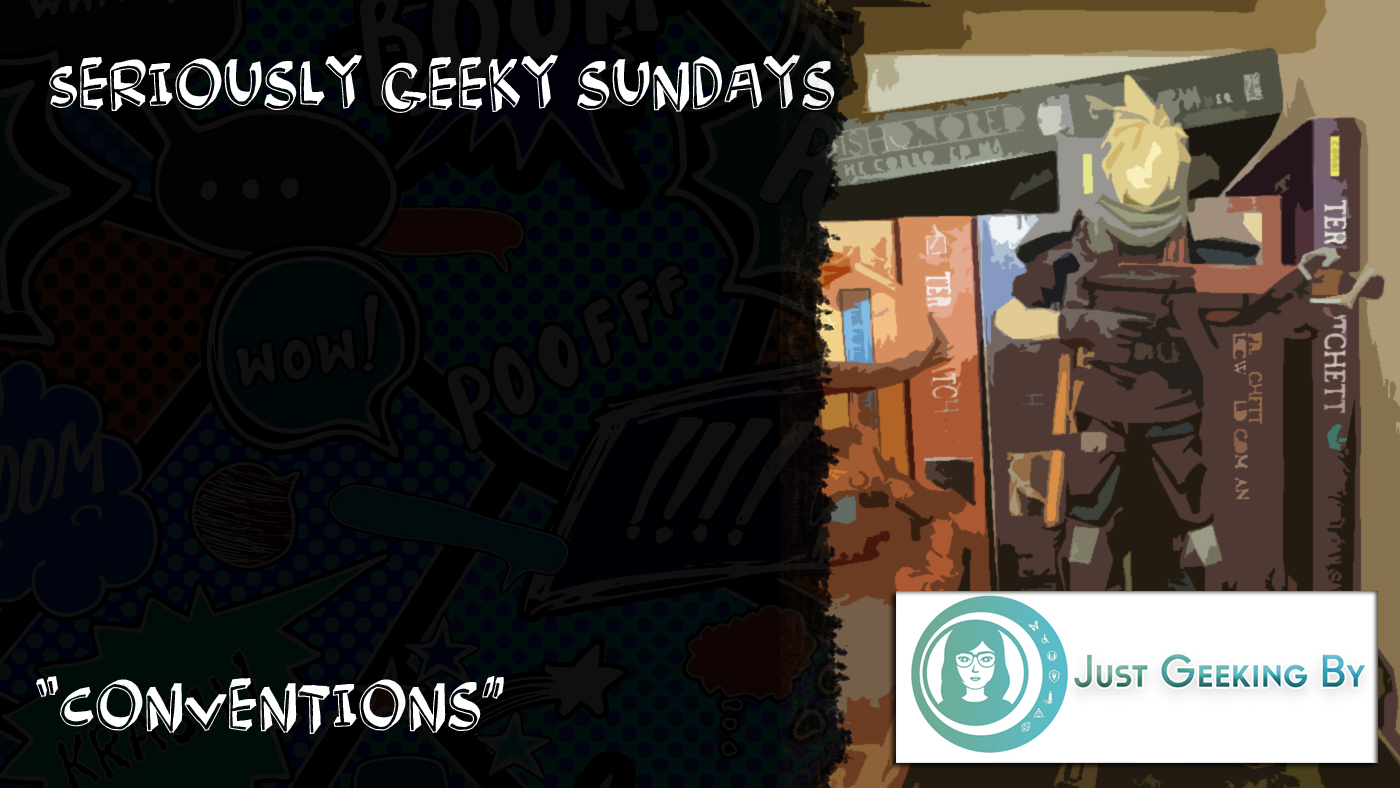 Welcome, my unconventional conventionalists, to another episode of what is quite probably the blogging world’s most powerful series, Seriously Geeky Sundays, commanded by the ever-excellent Heather of Just Geeking By and spread across this great, terrifying internet by the likes of Shoot the Rookie, SolarAyo and myself, to name but a few! So, as always, my thanks and salutations for Heather for setting this up, and let’s dive into the subject of the day, as described by Heather…

“It was supposed to be San Diego Comic-Con weekend this weekend. So many conventions have been canceled this year so we’re living vicariously this week as by talking all things conventions.”

Question 1 – Have You Been to a Convention and If So, How Many?

In my 35 years of life upon this earth, I have been to all of two conventions! The most recent was, I think, 2016, which was the Play Expo convention in Manchester, based at the Museum of Science and Industry.

This con was really cool, it had just about every video games console ever devised on show and, even more amazing still, you could actually sit down and play on them! I had an absolute blast playing on all sorts, an NES, a Saturn, N64, vintage arcade cabinets like Donkey Kong and, best of all, the rare and exotic Vectrex, which was incredibly cool and an honour to have a go of (I wasn’t very good at the game, but man it was cool!)

The first con I ever to was in 2009 and happened as something of a happy accident. That year, I and my good friends Stu and Ryan (my Shart Select co-hosts) went on a 3-day city break to none other than New York City, the Big Apple itself! Whilst there, we descended upon a very cool comic book store, where the friendly cashier asked if we wanted to buy discounted tickets to… New York Comic Con!

And oh my goodness, it was fantastic! It had it all, rare merchandise (my Shinra infantry Cloud figure still rocks), loads of inventive cosplay getups, panels, video game booths, it was out of this world for three awkward lads from the British countryside! If you ever find yourself over the pond and get a chance to go to a Comic Con, bloody well do it!

I just remembered I’ve also been to two conventions at the Bovington Tank Museum in the south of England, not far from Southampton. The first was in 2018, Tiger Day (featuring the last operational Tiger, WW2’s most powerful tank) and, last year, my dad and brother took me to Tankfest, a pageant of all things armoured vehicle, for part of my stag do! I wrote about it here!

Question 2 – What Was the Last Convention You Went To?

Well, seeing as I accidentally answered this in the last question, let me instead shoehorn in a kind-of con I went to a couple of years ago: the Retro Gaming Market which was in Stockport, Manchester.

It had everything for sale! tons and tons of games, refurbed rare consoles, controllers and shedloads of merch, both official and lovingly homemade! I spent about £50 there all in all, spending my budget on two new PS2 controllers (mine both had dud buttons for some reason), some PS1 games, Sonic Adventure (Japanese import) for the Dreamcast and even a GameBoy cartridge for my wife, it was fantastic and so reasonably priced!

Question 3 – What Is Your Favourite Convention Memory?

Seeing all of those unreleased video games getting shown off in New York, that was amazing. They had staff showing them off, giving out merchandise, posters, all of it was sublime. I’m not actually into comics, so I’d written it off in my head, the fact that it incorporated games and movies too really went a long way to make it into an event to remember.

There was also a moment when Sephiroth from Final Fantasy VII challenged Naruto to a foam swordfight in the lobby… it was intense!

Question 4 – Which Convention Would You Love To Go To?

One of the big gaming conventions, like E3 or PAX, but not just as a visitor, as a writer and podcaster. I can only imagine the kind of articles that I could write based on my experiences there, let alone what an episode of Shart Select recorded from PAX or E3 would contain!

I would also love to go to Tankfest again, but this time on the main show day. We went the day before last time and, whilst we got to watch the live displays still, one cannot help but wonder what extra bits were rolled out on the big day!

Question 5 – Who Are You Hoping To See At a Convention Next?

I’m not really too bothered about seeing any famous people to be honest. But if Arnold Schwarzeneggar rocked up at Tankfest that would be out of this world! Just imagine that!

Question 6 – What Is Your Favourite Purchase From a Convention?

Ladies, gentlemen and all other genders too, let me introduce you to Shinra infantry uniform Cloud! So far as I know he’s a limited edition to some degree (I couldn’t even find him on eBay or Amazon) and he looks very, very cool! I always loved the aesthetic of the Shinra soldiers, so having Cloud in the uniform of one is fantastic!

And that, as they say, is that. Thanks for coming to my convention, make sure to get a stamp on your hand in case you need to come back for anything and, as always, see you next time nerds!