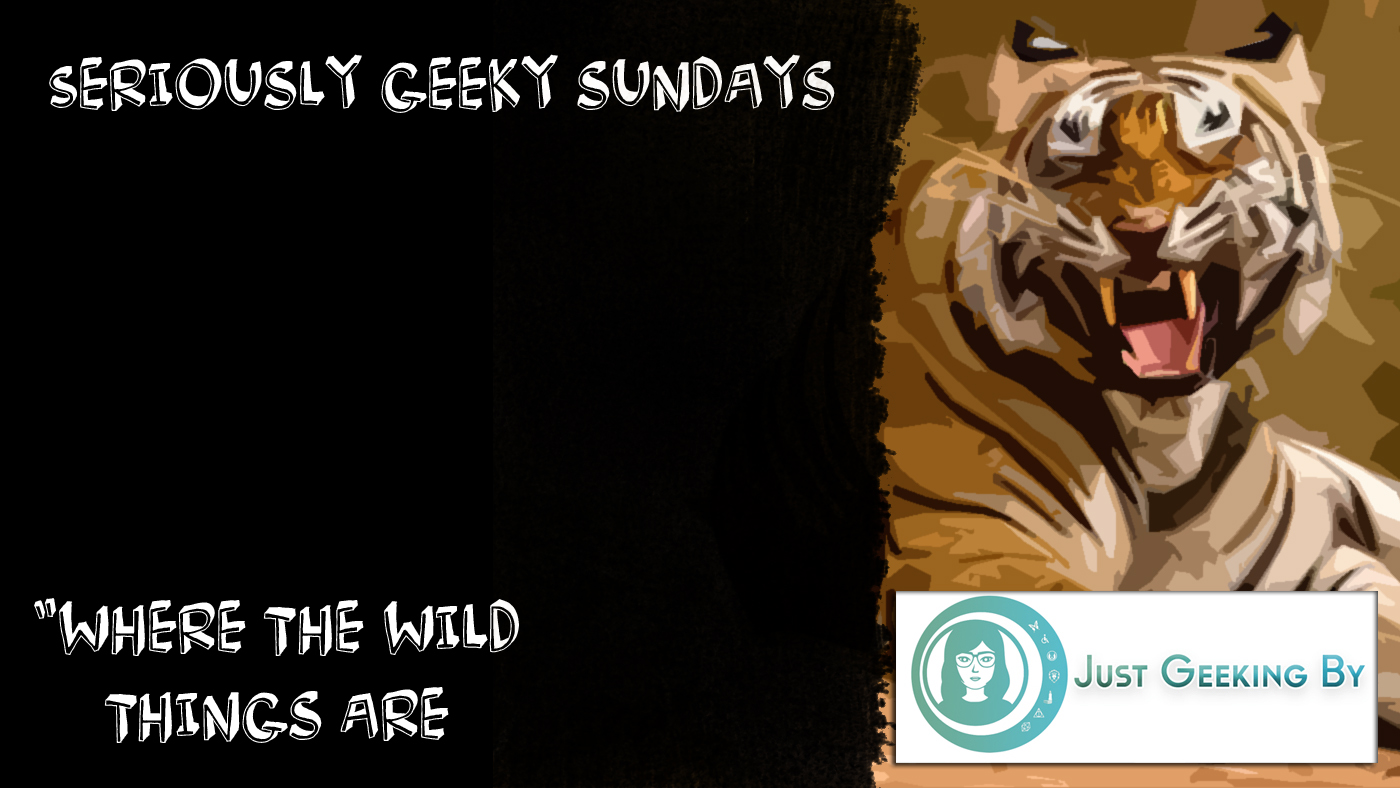 Ooh, join me out in the wilderness for a very interesting episode of Seriously Geeky Sundays, bought to us on the winds of the internet by Heather of Just Geeking By, who sits at the top of the food chain (blog chain? writing chain?) and never stops kicking arse!

So, today’s entry is all about animals, be they of myth or reality, fictional or real. I love animals, I have two old cats at home and an annual membership to our local zoo. My wife is an animal fanatic also, so it’s always an important subject in our household!

Anyway, let’s get some questions answered, shall we?

Question 1 – Cats and dogs frequently feature in fandoms, who are your favourites?

Anyone who knows me will know that I’m a super-fan of Morgana from Persona 5, the cat-like creature that looks after the heroes when they go on Metaverse adventures and can turn into a literal van.

But I could probably rebrand this blog as a Morgana fan-site the amount I go on about him, so instead I’m gonna go for 2 animal characters from another famous JRPG…

We first meet Red XIII as a captured test subject in the bowels of Shinra’s headquarters, where evil scientist Hojo is trying to get him to breed with (a very human, wtf) Aeris. Cloud and his band of heroes ruin the experiment, rescue Aeris and send Hojo packing, only for another test subject to be sent into the room to sort them all out.

With it all on the line, Red XIII reveals that he’s capable of speech, super intelligent and is willing to team up with Cloud and co to gain his freedom. From there, the lion/wolf like creature is a permanent ally of the party, joining them as far as his home, Cosmo Canyon. After an extremely emotional scene, where he learns the truth behind the fate of his father, Red decides to carry on travelling with the gang, aiding them in the quest to take down Sephiroth and save the planet. Legend.

Secondly from Final Fantasy VII we have Cait Sith, an anthropomorphic cat fortune teller who rides on the back of a giant stuffed moogle toy/killing machine.

Cloud and co first meet Cait Sith at the Gold Saucer theme park, whilst on the trail of big bad Sephiroth. Cait Sith accosts Cloud and insists on reading his fortune, getting a very odd result. Insistent on finding out what this portent could mean, he joins the gang to watch Cloud’s fate play out.

But there’s more to Cait Sith than meets the eye, indeed he is one mysterious kitty, surrounded by dark secrets. But hey, his darker side is just another reason why he’s such an underrated gem of a character!

Question 2 – Who is your favourite wild animal?

And this was no mean feat! Much like the legendary Watership Down, this children’s animted series had a rather sobering and gruesome approach to death. Cutesy animted animals die left and right in The Animals of Farthing Wood, due to infighting and the careless actions of humanity that cost them their titular home in the first place.

So here’s to the fox, a cool dude to the end, even if he couldn’t save them all.

Oh, and the snake was a shithouse.

Question 3 – Tell us about a fictional creature that fascinates you?

They’re bog yellow birds! You can ride them like a horse! Different coloured ones can traverse different terrain features and you can even summon them to help you out in battle!

Yep, these beloved steeds appear in most, if not all, of the Final Fantasy games in some capacity or other and help you out in all sorts of different ways. VII might be the best in the series for Chocobos (chocobi?) however, as you can not only race the little buggers at the Gold Saucer for fine prizes, but you can even breed them, with the ultimate goal of getting a golden chocobo that can pass over any terrain, allowing you to get onto a mysterious island and grab the utimate summon spell, Knights of the Round!

So wark wark, let’s all get chocobos (chocobi.)

Question 4 – Which mythological creature interests you the most?

Dragons are wicked aren’t they? I’ve already droned on about Smaug in an earlier post, but he is one of my all time most beloved fantasy characters, evil, greedy and awe inspiring with his massive wings and fire breath.

And he isn’t the only one. My favourite non-Smaug dragons appear in the 2000 PlayStation fantasy game Vagrant Story, in which assless chaps wearing assassin Ashley Riot must do battle with, among other things, bloody big, scary dragons. Get in close to avoid their fire breath and spear them in the neck!

Question 5 – If you could have an animal sidekick what would it be?

Imagine taking it to the park on a lead, everyone scattering in all directions and you just standing there like “what, it’s just Mister Tiddles!”

For real though, nothing says beautiful, deadly and powerful quite like a tiger!

Question 6 – You’ve been given the magical ability to turn into any creature; what do you choose and why?

Well if a tiger is my sidekick, I can’t very well turn into one, can I?

So I’ll be my favourite bird instead, a cassowary! What the funk is a cassowary, you ask? Well, it’s a big, flightless bird with long legs who lives in tropical climes, has really bright colours, a cool crest and, to put it lightly, will totally disembowel you if you mess with it. Not that I want to disembowel people… well, most people, honest…

So yeah, I think I’ll be a murder turkey.

And that’s it for another seriously geeky week! As always, be sure to check out all of the other posts under the #SeriouslyGeekySundays hashtag, there’s some seriously powerful writers there who are bound to thrill and entertain!

Oh, and before I go, we can’t talk about animals without mentioning two absolute legends close to my heart, Chester Zoo and the legendary Steve Irwin, because they’ve both done a lot of good for animals everywhere!

9 thoughts on “Seriously Geeky Sundays – Where the Wild Things Are”