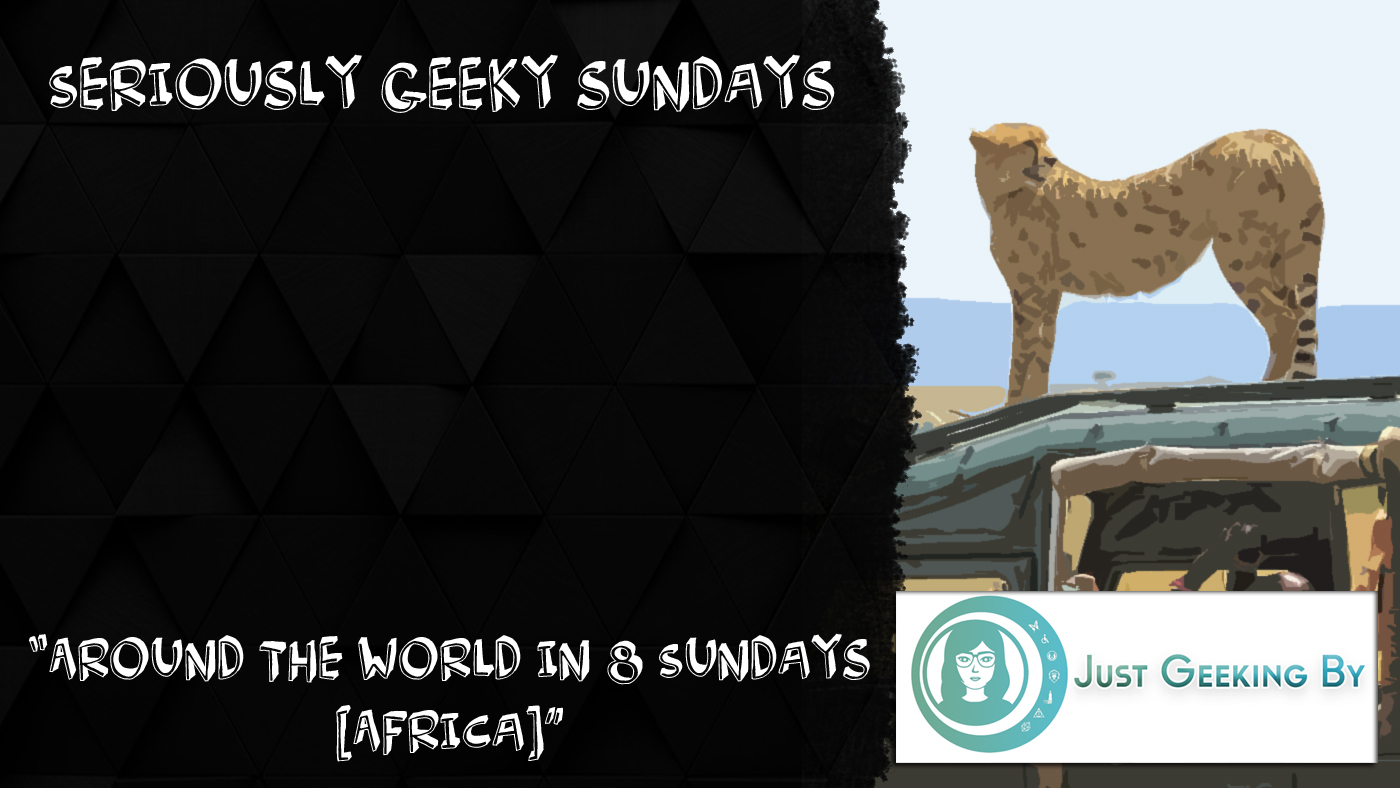 Happy Sunday to you! Or should I say isonto elijabulisayo?

Today is the final stop in the Seriously Geeky Sundays trip around the world, in which we learned about all kinds of fandoms from around the world. The Captain of this great ship was Heather, and the ship was the great, unsinkable (literally, not like Titanic) Just Geeking By… a website you should jolly well check out! And now, I must bless the rains dowwwwn in Affffricaaaa!!!

It’s the final Around the Sundays theme and our Seriously Geeky Sundays ship has reached its final destination; Africa!

Question 1 – What is your favourite fandom set in Africa?

I do love Black Panther, and who doesn’t, really?

Played with great aplomb by the late, great Chadwick Boseman, King T’Challa of Wakanda (a secretive, technologically advanced nation) is the titular Black Panther, a powerful warrior made strong by a mysterious heart-shaped herb and festooned with technology.

T’Challa first drops into the Marvel Cinematic Universe in Captain America: Civil War, when Cap’s longtime friend turned unwitting assassin Bucky Barnes/Winter Soldier is framed for a bombing that killed T’Challa’s old man. From there, once Bucky is off the hook, Black Panther fully teams up with the rest of the heroes, having his own movie and a central role in Infinity War, before being “blipped” out of existence as the end of that movie, then coming back for the final battle in Endgame.

With Chadwick’s tragic death last year, what direction will this awesome fandom go in next?

Question 2 – Who are your favourite fictional African characters?

Okay so I already gave Black Panther a mention, but I have to tell you about my favourite character, M’baku, the chieftain of Wakanda’s insular and warlike Jabari tribe. Played by Winston Duke, we first meet M’baku when his clan come down from the mountains to challenge T’Challa’s ascension to the throne with an epic ritual battle, which he loses.

He later returns for the big final battle against the movie’s big bad, Killmonger, siding with the good guys in an epic rumble. Whilst the other clans use super hi-tech gear and…er… giant rhinoceros, the Jabari just lay into the bad guys with good, old fashioned melee weapons, the fearless legends!

I also quite liked the African warlord bloke from the last Independence Day movie. Yeah, it wasn’t the best received movie, but that character had a rather charming arc!

Question 3 – Africa is a popular setting for video games; have you played any of them?

Whenever I think of Africa in video games, my mind always goes to the North Africa set missions in Medal of Honor: Underground. Though limited by PlayStation era graphics, Dreamworks Interactive did a fantastic job of capturing the atmosphere and feel of the desert. Your character, French saboteur Manon, gets up to all sorts in this neck of the woods, including disguising as a photographer to infiltrate the Afrika Corps lines, sneaking about in a sandstorm and, amusingly, running around Casablanca, shooting Nazis wearing fez hats. They were my favourite missions in a really good game.

I suspect ignorance might have something to do with this. How many African countries can the average person in the west name? Probably not that many, I’ll warrant. I’ve seen video games which say missions are set in Africa, instead of the actual country they’re in, whereas missions set in the USA are super specific as to which state, or even city, they’re in. It’s very strange.

On top of this, many African nations have pasts rife with problematic colonial interference, so I suspect countries like Wakanda were invented to strip European interference out, and let African culture exist unimpeded, which definitely is an admirable idea. African culture in it’s purest form is really worth talking about.

Question 5 – Africa is home to Egypt and ancient Egypt has been given the pop-culture treatment many times. Which has been your favourite?

I always quite enjoyed Stargate, that classic ’90s sci-fi movie starring James Spader and Kurt Russell. It kind of took the old “ancient aliens” conspiracy theory and fleshed it out, coming up with a compelling, crazy story about the titular inter-dimensional gateway, and the special forces team sent through it to see what’s what.

Turns out that said ancient aliens are “what”, and they’re naturally an unpleasant lot, with hi-tech weaponry and a penchant for slavery. Lucy Kurt’s on the job to sort them all out… even without his legendary mullet.

First up, the ever-imposing Peter Mensah, who was in Spartacus for most of it’s run as Doctore, and, perhaps more famously, the guy that gets Spartan kicked into that pit at the start of 300. You know, the “This! Is! Sparta!” bit.

Next up, Chiwitel Ejiofor. I first encountered him in Serenity, in which he played the well-spoken but menacing Federation Agent, a deadly assassin with a katana who nearly gave Captain Mal a sorting out for good. He’s also been fantastic in Doctor Strange and 12 Years a Slave, and even gave a decent turn as Scar in the divisive Lion King remake. Shame he didn’t do a proper Be Prepared though.

Danai Gurira… I’ve sung her praises before. All I need to say is General Okoye and Michonne, right?

Then we have Djimon Honsou, a versatile and talented actor that has appeared in everything from Gladiator to Shazam, with two MCU movies thrown into his impressive list too. Always a fan of Djimon, I even liked White Elephant, an action movie where a weirdly cockney Kevin Bacon is his mate.

There are so many more out there, too, this is hardly an extensive list, just a few of my favourites. Africa has so many fantastic performers out there who need to be checked out!

And that’s it, we’ve run down the clock on another exciting episode! I sure hope you enjoyed it, and maybe picked up some new bits of information about the cradle of life, Africa. As always, check out all of the other writers under the #SeriouslyGeekySundays hashtag, they’re out of this world!

See you all next time, gang!